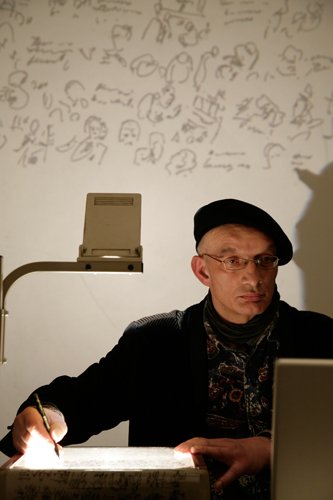 Thanks to Paul-Carey Kent and Christina Niederberger from Friday November 1st 2013 there is a rare opportunity to see all five Buskova films in sequence at the ASC Gallery on Blackfriars Road, London. 'It's about time' is the apt name for this intriguing group exhibition. It is also about time that Paul Carey-Kent's articulate passion for art translated into an exhibition. It looks like it will be worth the wait. The over arching concepts are coherent and the artists have been judiciously selected over several years after trawling hundreds of exhibitions. Most people will probably make it to the exhibition during the healthy two months run from November 1st to December 21st 2013. However, all these people will be too late to see German born artist Harald Smykla perform live in response to Buskova's five films at the private view. Smykla is known for his movie protocol performances involving drawn pictographic notation of films.


Here are some more details:

The fourteen artists in this exhibition explore the nature of time and how different timescales can function simultaneously in an artwork. They operate in painting, photography, sculpture, installation, film and performance in four main ways:
• putting more than one timescale into an image;
• the strategy of ‘recreating’ one time in another;
• building the representation of time into a work;
• making visible the time which passes in the making of the work.

The show also encourages us to consider how two fundamentally contrasting philosophical viewpoints dominate our current understanding of time.

• Newtonian time conceives time as a universal given that structures events in linear succession. According to this understanding time travel is – theoretically – possible.
• The opposing view, in the tradition of Leibniz and Kant, states that time doesn’t refer to any kind of given container through which events and objects move, but is part of a fundamental intellectual structure which allows us to represent, compare and order things. Time, then, is neither an event nor a thing, and thus is not itself measurable nor can it be travelled.

Either way, time is not the simple matter it seems when reading a clock.