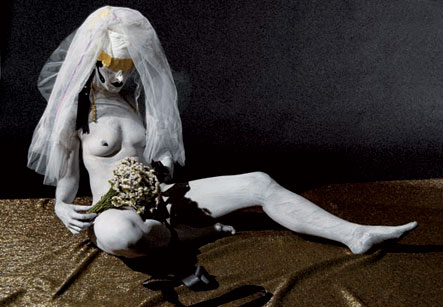 After Dodge’s cool display, entering the downstairs space, where photographs and a film by Tereza Buskova are exhibited, takes a little adjustment. Theatre and fantasy are at the forefront of Buskova’s works, which play out scenes of a wedding filled with ritualistic intensity, alongside an undercurrent of something more discomforting. The bride is heavily made-up so that she wears only a haughty, angry expression, topped by an elaborate veil or headpiece, which is also displayed in the gallery. The performance here is an overtly sexual one, with the bride at times found stalking virtually naked through a garden setting, or cavorting provocatively in her bridal gown.

Czech-born Buskova draws on Eastern European folk traditions and symbolism in the works, but presents them with neither subtlety nor explanation, so that the ritualistic imagery appears confusingly sinister. But perhaps this is her point: these rituals are steeped in a language of imagery that can be elusive to outsiders. When shown alongside Dodge, however, Buskova’s work feels exaggerated and melodramatic, quite lacking in the depth of storytelling that his enigmatic sculptures contain. While rich in exotic imagery, they offer little that truly intrigues.