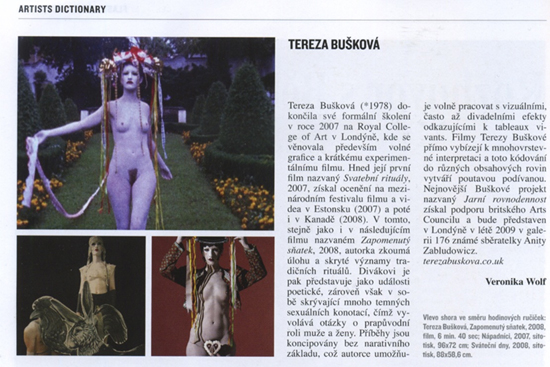 The Czech artist, Tereza Bušková (born 1978), completed her MA in 2007 at the Royal College of Art in London, where she concentrated mainly on printmaking and short experimental film. She attained acclaim early with her first film ‘Wedding Rituals’ (2007) at the Pärnu International Film & Video Festival in Estonia in the same year, and then again in Canada at the AGH's 10th International Film & Video Festival in 2008. In this and in her next film, ‘Forgotten Marriage’ (2008), she has examined the roles and hidden meanings of traditional rituals. These are presented to the viewer as poetic events, while nonetheless retaining much in terms of dark sexual connotations, thereby evoking questions regarding primeval gender roles. The stories are presented without a narrative framework, which enables the author to work very loosely with visual, and often almost theatrical effects reminiscent of Tableaux Vivants. Tereza Bušková’s films encourage a multilayered interpretation, and her setting up of these different yet parallel layers of meaning makes for very compelling viewing. Bušková’s most recent project, entitled ‘Spring Equinox’ has gained the support of the British Arts Council, and is to be exhibited from 9 July until 16 August 2009 in Anita Zabludowicz’s 176 Gallery in London.