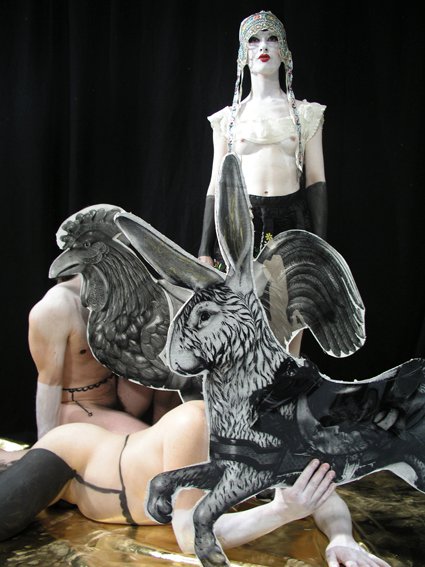 For a straightforwardly-presented film to work in a gallery context -rather than just turning the gallery into a cinema – it needs to have an immediate impact which draws the passing viewer in, whenever they arrive. The London-based Czech Tereza Buskova has made three films of a few minutes each – with a fourth in production – which achieve that with intoxicatingly effect.

The films present living tableaux, more like a linked succession of moving paintings than a story, in which traditional Bohemian rituals are seamlessly merged with artistic reinterpretations and interventions. They are wordless, their heady atmosphere heightened by haunting, cello-heavy soundtracks. Buskova makes the costumes and props, directs the actor-dancers and edits the film. She also makes screenprints from the action: the colour coordination and heraldic flatness of the scenes are well-suited to the still image.

Buskova’s first three films have given us her take on ‘Wedding Rituals’ (2007), which seem more foreboding than celebratory; the logical follow-up of a ‘Forgotten Marriage’ (2008); and ‘Spring Equinox’ (2009), her version of Easter rituals in the oldest village in Moravia. Slow-moving white-painted near-naked women, cardboard cut-out animals to represent fertility, and bizarre headwear recur. There are narrative strands of sorts but they’re mysterious: the men in Spring Equinox, for example, start out joyfully whipping maidens’ buttocks but end up blindfolded and stranded in a lake, at which they now lash out.

The effect is a kind of invisibly unified collage of the old and the new which freshens up the decadence of the past. But what lies beyond the mesmerising folk surrealism? The films assert the resilience of local cultures – these rituals have seen off communism – and also ask two interesting questions. First, what role should traditions play in the modern world? Best, Buskova implies, not to let them ossify in conservation, but to change them to suit the present. Second, what is the boundary between life and art? The melding of the two shows that the division is not such a simple one, and speaks for the art of living.

Next up will be the results of Buskova’s February filming of the carnival of Masopust, in which, she says, Bohemian villagers deal with their cold winter with a combination of drink, meat, processions, brass bands and grotesque behaviour. Sounds like just the thing for our economically tough times … Let the carnival begin!