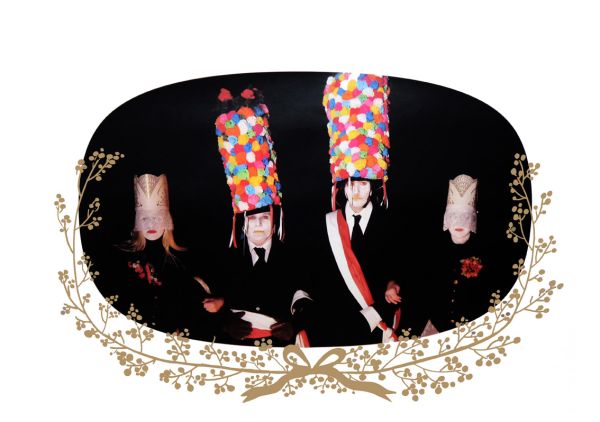 Crisp colours, striking folk-costume and visceral imagery stand out in the work of Tereza Buskova, our inaugeral Submission of the Week for the Converse/Dazed Emerging Artists Award 2011 in partnership with the Whitechapel gallery. Buskova graduated in 2005 with an MA in Printmaking from the Royal College of Art and has since gone on to create a body of work in film and video as well as print, embarking on a long-term collaboration with cellist Bela Emerson, performance artist Zoë Simon and Nanohach dancer Eliska Kasparova in the creation of ritualistic performances that sit at the heart of her projects.

Performed actions that are at once familiar and uncanny are presented through stylised movement and filmed with tender observation, often accompanied by a cello soundtrack that evokes the suggestion of a latent darkness beneath the layers of costume and colour. As a continuation of her exploration of life and rebirth in rural Slavic Easter rituals in ‘Spring Equinox’ (2009), for the Converse/Dazed Emerging Artists Award this year she has submitted 'Masopust', a 'marriage of anthropology with fantasies in the forms of performance prints and video’. 'Masopust' translates in Czech as 'farewell to meat' and is the name of a rural festival that ushered in a period of abstinence from eating flesh (the festival of Carne-Vale is the Western equivalent). Travelling to the village of Doudleby in Eastern Europe, Buskova observed as the locals conducted 'esoteric ceremonies with funereal solemnity'. She then freely interpreted the actions of ‘Masopust’ in the mountains with her performers where 'raw human qualities and a respect for ritual were distilled'.

By enlivening these half-remembered ceremonies Buskova suggests that 'our traditions should not grow dusty whilst being preserved in boring museum cabinets' and by breaking down and representing ritual, she reflects on the gestures that bind us all to a social history. Having exhibited in shows including the 2011 RA Summer Exhibition, Yinka Shonibare's Guest Projects space in London Fields and numerous shows at the Zabludowicz Collection as well as receiving the 2010 Saatchi Online Critics Choice Award, her star is rising rapidly.