''Masopust', a 'marriage of anthropology with fantasies in the forms of performance prints and video’. 'Masopust' translates in Czech as 'farewell to meat' and is the name of a rural festival that ushered in a period of abstinence from eating flesh (the festival of Carne-Vale is the Western equivalent). Travelling to the village of Doudleby in Eastern Europe, Buskova observed as the locals conducted 'esoteric ceremonies with funereal solemnity'. She then freely interpreted the actions of ‘Masopust’ in the mountains with her performers where 'raw human qualities and a respect for ritual were distilled'.' 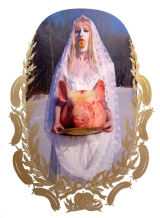