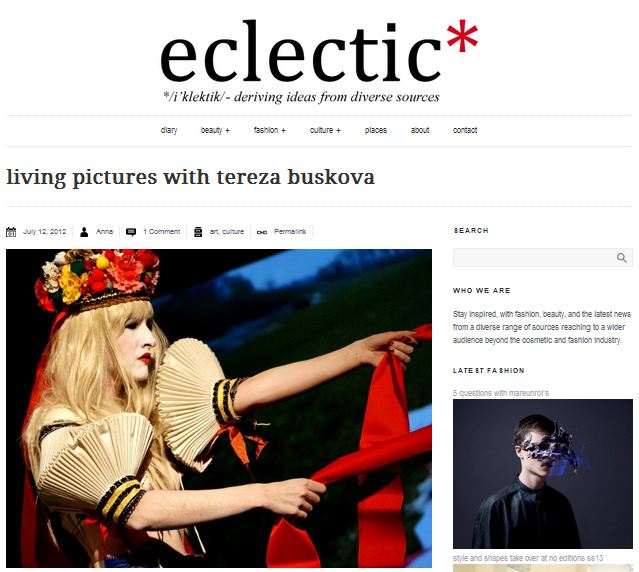 London based Czech artist, Tereza Buskova, brings together dreamy, visceral images in a variation of mediums from film, screen printing to performance exploring practices and the renewal of folk traditions along with a bold use of color and striking, stylized costumes. Tereza speaks to eclectic* about her journey and exploration.

eclectic*: How did you get into photography? What was the attraction?

tereza: I started my BA HONS in Fine Art as a painter but was soon very bored and found this medium to be quite limiting. I had so many visions in my head but drawing them on a piece of paper would not work; I found it too dead and one dimensional. I was quite shy in those days and only imagined in my head what it would it be like to stage my own living picture / collage, using a real female body, paint and paper, which I would then photograph and use a as starting point for further work using printmaking techniques such as photo-litho or screen printing. This ‘life layering’ really excited me but I lacked the courage to try it until one day a close friend of mine and fellow artist Maggie Tran said to me: ‘Buskova, stop being a push over and just do it!’ So I did and I have never looked back…..

e: Has your Czech background had an influence on your work?

t: My Czech background is the main influence on my work, but I hadn’t realized this until I lived here in the UK. Traditional Bohemian rituals and old pagan traditions are freely merged in my work with my own interpretations. These very old and very rich rituals which have survived in the Czech Republic are visual treasures and do remind us of our past and roots, but sadly I think that they keep losing their original symbolism, raw nature and most importantly magic. People perform these traditions every year but perhaps more out of a habit or a duty to pass on what our families have been doing year after a year. I observe these rituals in person together with my performers and then I re-locate to nearby natural settings where we become these villagers and their ancestors, and connect with profound aspects of all our souls. I was once attacked by a Czech ethnographer for re-inventing long existing traditions, which in their eyes should be only kept in museum cabinets. I very much respect and celebrate these traditions same as they or you do, I only express them in a different way…

e: What is your perception of beauty?

t: I don’t have a perception of beauty, same as I don’t separate the female from the male. What I find visually stimulating (like placing doilies on man’s face) others’ may find ugly and sinister. For me beauty lies in our unique and individualised perception of the world around us.


Tereza documenting by Jan Komarek
e: What themes run through your work?

t: In my work, I portray the strength of femininity and explore the hidden meanings and symbolism in rituals / traditions. There is no set narrative; it is very much an improvised visual poetically and sexually charged journey through the beautiful and the dark symbolism which is strongly embedded into our folklore. This is presented in the films or prints as tableaux vivant – living pictures.

e: Which artists have had an influence on you and your career?

t: To be honest, I have never really looked much at other artists for influences….I just find them from elsewhere – film, theatre, folk tales or just everyday life. Sometimes I hear people saying to me ‘Oh, your work reminds me of so and so artist, were you inspired by them?’ And I say ‘No, who are they?’ I think the biggest influence is my long term performer Zoë Simon (actress, playwright and life drawing model) who was a god send for my work. She is my muse, my alter ego….without her and others my work would not exist.


'The Mother of Masopust' Screen Print


e: Who would you like to meet at a dinner party?

t: It would have to be David Lynch. I would invite him to collaborate with me on one of my films or produce another series of Twin Peaks with him. He is a true genius who brought a great work of art to our television screens!

e: If you could be resurrected, what would you like to come back as?

e: What is your favorite macaroon flavor?

t: I have got a bit of an obsession with macaroons…..I always go for the same flavor – vanilla.

t: I have been to Berlin, so Tokyo.

Currently Buskova works towards a group exhibition 'Monoculture' in collaboration with Tamsyn Challenger and Matthew Cowan at the Beaconsfield London, starting this November. For this show she will travel to the village of her adolescent holidays to create the ‘Dough Woman of Doubice’.