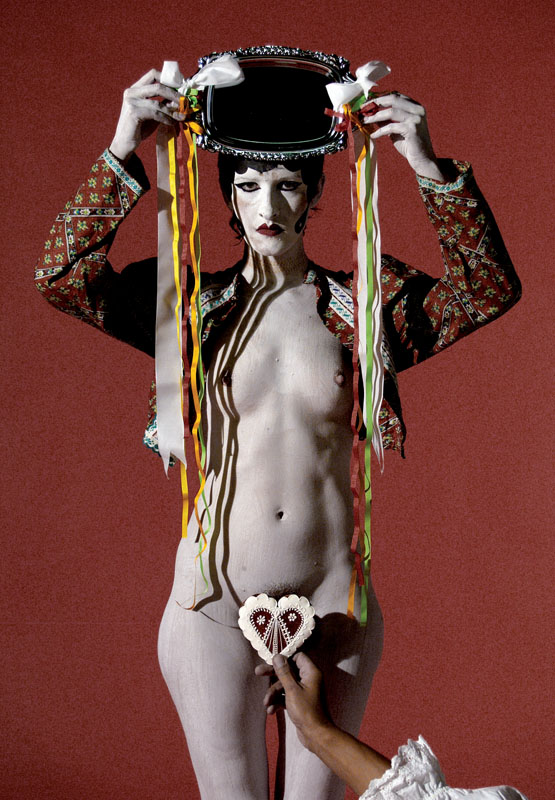 In London Gallery One-One-One in 2008 there was an exhibition of works of two young artists - American Jason Dodge and Teresa Bušková from Prague. David Roberts Art Foundation held this exhibition called Rituals.

Music of Bela Emerson on display in the Gallery One-One-One was accompanied by film screenings Teresa Bušková Lost marriage. In this six-minute film, shot on Duchcov castle where lived famous women lover Giacomo Casanova, the camera comes to a slow step, painted white bride as God created it. It is an English actress Zoe Simon. The groom, a Czech model Jaroslav Bartunek, the film is not wearing any more. The exhibition is complemented Teresa Bušková five paintings, screen printing, which is again a leading topic of erotic piercing with prevailing colors - white and red. I asked the curator of the exhibition at Gaya Tudoniové her opinion on the work of Teresa Bušková.

"Yes, Teresa Bušková is definitely interested in your work to express ideas related to sensuality and sexuality, the idea of beauty and mystery alongside zlov?stnosti. But I think that is primarily interested in production situations and feelings," she said gallery curator.

Twenty-nine Bušková Teresa lived in Britain for ten years, last year became a master class MA graduate of the Royal Academy of Art in London. It was there, the exhibition of works of graduates, her work caught the attention of the former curator of the famous Tate Modern Honorého Mr. Vincent, who then invited Teresa Bušková galery in London One-One-One, so there along with fellow American Jason Dodge exhibited. The theme of the exhibition are rituals, and Jason Dodge minimalist there is such a stuffed owl resting on a cardboard box under the title Rubies in the interior of an owl with an explanation for the viewer that the embalming of the owls were deposited into her rubies. Also ritual.