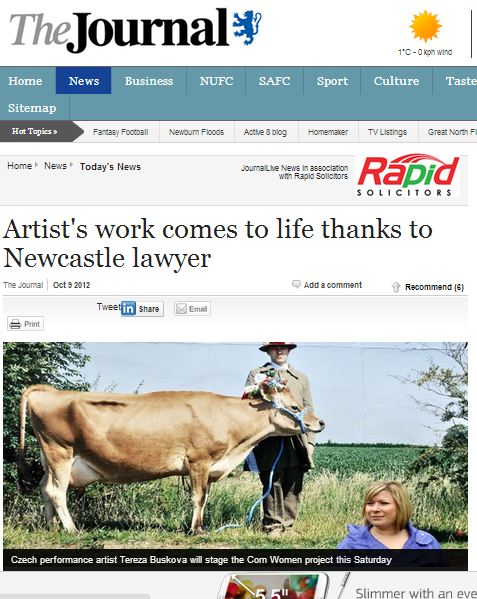 Artist's work comes to life thanks to Newcastle lawyer

Czech performance artist Tereza Buskova will stage the Corn Women project this Saturday
A MYTHICAL goddess will ride naked on horseback through an underground car park in the middle of Newcastle - thanks to an unusual friendship between an artist and her solicitor benefactor.

Czech performance artist Tereza Buskova will stage the Corn Women project this Saturday, in which actress Zoe Simon will ride through the car park beneath the old Commercial Union building off Newcastle’s Pilgrim Street to a musical accompaniment. The event will be filmed to be shown at a gallery in the city, in a performance involving Northumbria and Teesside universities.

And among those in the audience for the event will be lawyer Chris Shaw, who met Tereza at a picture framers in Newcastle in 2001 and has since supported a number of the artist’s unusual works which would otherwise not have been produced.

Tereza, who is originally from the Czech Republic, studied fine art at Northumbria University before moving to the Royal College of Art and becoming feted in London and abroad for her talent. Her work has been described as blending “dreamy, visceral images” of nature and magic to reinterpret traditional Bohemian rituals and old pagan traditions.

Talking of her new project, Tereza said: “The narrative is based on the goddess of the corn. I thought it would be interesting to have an animal in the performance if possible, and the car park is very atmospheric.

“Animals were often used in Czech traditions and rituals. The performers would be riding through the village on a horse, dressed up, and perform a ritual.”

She added: “If it’s possible for the horse to arrive from the street itself that would be amazing – it would add more reality to it, it would be more magic realism – because all of these rituals happen outside and the public is involved, standing in the streets.”

Chris Shaw operates specialist law firm Shaw and Co on Newcastle’s Quayside, and after first meeting Tereza he provided financial support for a 2009 project that allowed her to qualify for an Arts Council grant. He has since supported a number of her works, encouraging her to keep on with her art after giving birth to her first child, and dedicating a page on his firm’s website to her art.

Speaking about their relationship, Tereza said: “It is unusual, as is the fact he encountered my work purely by chance.

“But it’s good for me that he did